Seventh-day Adventist beliefs are meant to permeate your whole life. Growing out of scriptures that paint a compelling portrait of God, you are invited to explore, experience and know the One who desires to make us whole.

Message from the Director of Online Communications

Greetings in the name of our Lord Jesus Christ! 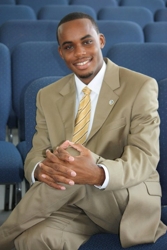 I want to take this opportunity to welcome you to the Official website of the Ebenezer Seventh-day Adventist Church here in the beautiful island of Barbados.
We are privileged to be able to share our events and good news of salvation with you via the World Wide Web.

The Seventh-day Adventist Church was historically founded by a group of eager bible searching individuals in the early 19th century after an event the church remembers as the "Great Disappointment." It all began with a baptist preacher, William Miller, who preached on the second advent of Jesus Christ based on the interpretation of Daniel 8:14. Soon after, persons within his hearing from the United States began following his teachings which led to the formation of the "Millerite movement" - the movement that would later go on to form the Seventh-day Adventist World Church as we know it today! Miller, along with other prominent pioneers of the church such as Hiram Edson, James White, his wife Ellen White, J.N. Andrews and Joseph Bates, re-examined the scriptures after recognising that Christ did not return on the proposed date of October 22, 1844. With earnest study, they understood that Christ, rather than returning to earth as they expected, was actually beginning his last phase of his atoning ministry in the heavenly sanctuary. The Millerite movement, with their strong belief in the eventual return of Jesus Christ to the earth, the observance of the seventh-day sabbath along with truths on the state of the dead proved pivotal to the development of the core doctrines of the church today!

But contrary to popular belief, our belief system goes far beyond observance of the sabbath, abstinence from consumption of harmful products and abstinence from wearing of jewelry, other piercings or tattoes. At the core of our church lies the basic truths that God loves, creates, redeems, inhabits, transforms and most importantly - triumphs! Upon these basic truths (outlined by our only source of our beliefs - the bible!), the church over the years has noted 28 fundamental beliefs that range from the acceptance of the Trinity, the need for baptism, the spirit of prophecy to the eventual reality of the 'new earth.'

It is through our belief and love for God that we strive to adopt a very "Christ-centered" liefstyle regardless of how much sacrifice that may require on our part! The Seventh-day Adventist christian is driven by high moral standards as commissioned by His call to love God and love our neighbour as we love ourself!
~ Mark 12: 30-31.

The members of the Ebenezer Seventh-day Adventist Church are no different from the aforementioned. With warm greetings from the moment you enter the door and courteous, caring and uplifting members along the way, Ebenezer prides itself on being the beacon in a sin-cursed world! As agents through which Christ can use to bring about His transforming power, we take our Gospel Comission through Matthew 28:18-20 very seriously and the use of such a medium to deliver God's word is an example of such.

So as you peruse our website, it is the prayer of the Online Communications Committee that your heart would be blessed and your life be positively influenced to give your heart to the master & soon coming King - Jesus Christ!

Finally, may the Lord bless you & keep you! The Lord make His face shine on you and be gracious to you... The Lord turn his face toward you and give you peace [both now and forevermore...Amen]!"